Looking back on the aggregate industry in 2019

Looking back on the aggregate industry in 2019

Aggregate production continued on an upward path in the first two quarters of the year. Photo by Kevin Yanik

Another year – heck, another decade – has nearly passed us by.

The aggregate industry is already turning its attention to 2020, which contains a presidential election that’s undoubtedly leaving producers, manufacturers, dealers and other industry stakeholders feeling somewhat uncertain about the months and years ahead.

But with 2019 nearly behind us, we can stop for a moment to take inventory of how the final year of the 2010s ultimately went. Looking back on events and developments that surfaced throughout the year, here are eight takeaways on the year that was for the aggregate industry.

1. Overall, 2019 can be characterized as a good year for the industry. Crushed stone, sand and gravel production was healthy, as evidenced by the U.S. Geological Survey’s most recent quarterly data.

Compared with 2018, crushed stone production was up 4 percent in each of the first two quarters of 2019. Sand and gravel production, meanwhile, was up 3 percent in the first quarter and up slightly in the second quarter of the year.

Construction activity generally carried on at a productive rate – one some economists describe as more normal –providing a healthy amount of demand for construction materials.

2. Still, the weather once again presented a number of producers with significant challenges. The rain especially presented issues. 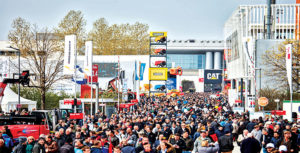 According to the National Oceanic & Atmospheric Administration (NOAA), precipitation from January to August was the wettest on record for the Lower 48. Five of the first six months of the year were wet, NOAA adds, and the conditions affected producers across the nation to varying degrees.

A number of producers, including Magruder Limestone’s Clark Bollinger, experienced flooding that ate into production time.

“I have no idea what the weather’s going to do next year,” says Bollinger, who oversees nine active operations in Missouri. “Hopefully, it doesn’t trend into next year like this past season.”

3. A federal highway bill continues to elude producers. Another year is about to pass without the passage of a much-needed highway bill on the federal level. But should the industry be surprised at this point?

Infrastructure was supposed to be the one issue Republicans and Democrats could agree on, but political infighting once again derailed any potential compromise.

President Trump, House Speaker Nancy Pelosi (D-California) and Senate Minority Leader Chuck Schumer (D-New York) did provide a glimmer of hope on this issue at the end of April when the three collectively agreed to pursue an infrastructure deal totaling $2 trillion. Less than a month later, the infrastructure talks blew up after Trump and Pelosi feuded over the investigation into his administration.

With a presidential election coming in the new year, the chances of the White House and congressional leaders coming to terms on infrastructure is virtually none. In the meantime, more states have been picking up the federal government’s slack.

4. AGG1 attendance fueled early-year optimism. While 2019 was not a ConExpo-Con/Agg year, producers still got out in record numbers to see the industry’s latest equipment and technology offerings at AGG1 Aggregates Academy & Expo. 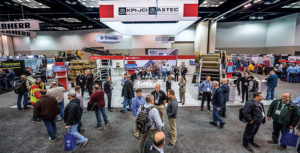 AGG1 2019 drew more people than any in the history of the 10-year venture. Photo courtesy of World of Asphalt

The show, which took place Feb. 12-14 in Indianapolis, had plenty of doubters going in. Leading into the show, exhibitors and attendees feared a blizzard might produce a dud of an event. In the end, though, AGG1 drew more people than any in the history of the 10-year venture.

In fact, more than 10,000 people attended the events at the Indiana Convention Center, with the Tuesday (Day 1) and Wednesday (Day 2) of AGG1 being the high-traffic days. Attendees came from all 50 states, as well as 56 countries, according to the National, Stone, Sand & Gravel Association (NSSGA).

Based on a number of conversations P&Q had with AGG1 exhibitors, the quality of the 2019 attendees was very good for most part. There are “tire kickers” at every trade show, but most exhibitors detailed to P&Q how AGG1 provided them with a series of serious leads.

Aggregate producers arrived in Indianapolis ready to buy. Co-locating with the Indiana Mineral Aggregate Association’s Annual Meeting certainly helped, as this state organization brought a strong contingent of its members to Indianapolis.

5. The show positivity carried over to Bauma. While AGG1 represented the largest gathering of U.S. aggregate producers in 2019, Bauma drew more than 620,000 visitors April 8-14 to its 2019 edition in Munich, Germany.

“For the industry, Bauma is by far the world’s most important innovation platform and economic engine, something we clearly saw this year,” says Klaus Dittrich, chairman and CEO of Messe München, the show organizer.

“Particularly in these times of sweeping technological change that is being triggered by digitalization, Bauma provides the industry with security and confidence.

A number of manufacturers serving the U.S. market introduced their latest wares at Bauma, including CDE, Kolberg-Pioneer, McLanahan Corp. and Metso. 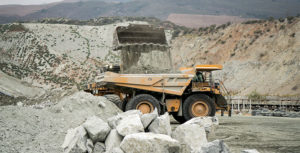 6. The consolidation of industry manufacturers continues. Perhaps the biggest developments on the equipment supplier merger-and-acquisition front involved Metso, which made two big announcements midway through 2019.

In June, Metso signed an agreement to acquire McCloskey International, the Canadian mobile crushing and screening equipment manufacturer. The transaction, which is valued at about $316 million, was made to strength Metso’s aggregate business in key growth areas. Metso also revealed that it planned to develop the McCloskey brands and distribution channels independent of the Metso channel.

Less than a month later, Metso made an even bigger announcement when it publicized that it had come to an agreement with Outotec, a Finnish company, on a merger deal to create a combined company serving the aggregate, minerals and metals industries. The combined company, comprising Metso Minerals and Outotec but excluding Metso Flow Control, is called Metso Outotec.

Combined, Metso Minerals and Outotec had 2018 sales of about $4.4 billion – and about $4.7 billion (4.2 billion euros) when the McCloskey deal is factored in.

“The combination of Metso and Outotec is a unique opportunity to deliver significant value for our shareholders with a broad presence across minerals, metals and aggregates value chains and an even stronger platform for growth and innovation,” says Mikael Lilius, Metso chairman.

Although the two Metso deals this year probably garnered the most attention, other mergers and acquisitions involving industry manufacturers also went down. Screen Machine Industries’ first-quarter purchase of Diamond Z, a chipping and grinding manufacturer, was one such transaction.

7. The aggregate industry maintains a safety record it can be proud of. As of press time, the metal/nonmetal mining industry was trending toward an all-time low for fatalities in a single year.

Eleven miners died in metal/nonmetal through early November (including one who died from natural causes), with five of the fatal accidents occurring at crushed stone, sand and gravel operations.

Of course, this is not to dismiss the accidents that did happen in 2019. Historically, however, the mining industry has made remarkable strides over the course of a century – and it made even more dramatic improvements over the last decade.

Aggregate producers and industry stakeholders continue to make efforts to push that fatality statistic to zero. Seat belt safety remains a sizable industry issue, but the Mine Safety & Health Administration (MSHA) is making a push under assistant secretary David Zatezalo to reemphasize the use of seat belts.

NSSGA is getting the word out on this issue, as well. The association launched a seat belt safety campaign in 2019 driven by the slogan: “Why risk it? Just click it!”

8. The “One MSHA” initiative remains a work in progress. This MSHA initiative is well underway by now, but a number of producers have more questions than answers at this stage about who within the agency has jurisdiction over their operations.

As Ogletree Deakins’ Bill Doran and Margo Lopez described in their September 2019 column, some producers learned they were redistricted in responses to informal conference requests while others received more reassuring news from the agency.

As Doran and Lopez write: “For instance, a surface aggregate operation in the Midwest recently received this message from a call district manager: ‘We have been assigned to continue the duties of oversight of inspection activities that will be required for your properties that are under MSHA jurisdiction.

“First of all, your inspections will still be primarily handled by the same inspectors you have been inspected by in the past. Other than specialty inspection or investigations that may require an expertise not available in the field offices, you will only see visiting inspectors from the [coal district] on a limited basis.”

The mixed messaging from MSHA is somewhat unsettling, but the agency’s goal of streamlining efforts and addressing the most significant hazards and conditions within operations were noble first steps. Getting the right personnel organized across the agency, however, remains a work in progress.

See what you missed at Con Expo!!!!